Don’t get me wrong, I’m not an Apple fanboy. I don’t own any Apple device and I will not buy one in the near future. I think Apple behaves pretty arrogant sometimes, especially when they talk about Android. But we all have to admit that Apple did a good job on the iPhone and the iPad. Both are selling more than well and the iPad revived the marked for tablet computers (even if others – like Microsoft – had one in their portfolio long before Apple).

A few months ago, Samsung launched a new product called “Galaxy Gear”. It’s a smartwatch – a intelligent watch which gives you instant information about incoming eMails, weather, news…  According to a report from geek.com, 30% of all sold Galaxy Gears were returned to the shops – not because they are broken but because the customers don’t want them anymore. Why? That’s the big question, no one knows. But I think, it’s pretty obvious where the problems are. First of all, the Galaxy Gear smartwatch only works when you have a smartphone with you. And not just any smartphone, you need a Samsung Galaxy Note 3 – all other smartphones are not supported yet.  I don’t know what the engineers thought when they developed this watch: Hey, let us create a device which costs about 300 Euro but only works when you have another device which costs another 700 Euro!

This is ridiculous. When Apple launches its iWatch, I bet there is no additional smartphone needed. Think of the scope of a smartwatch: Where would you use a smartwatch? To check eMails? Of course not, the screen is too small. Would you telephone with your smartwatch? No you wouldn’t, it looks ridiculous if you hold your wrest to your ear. So where can we use such a watch? The answer is: When you do sports! When people do workout or when they run, most of them have their smartphone with them. Not to telephone but to listen to music, monitor the pulse or track the route they are running. What do people nowadays do? They strap their phone around their arm like this: 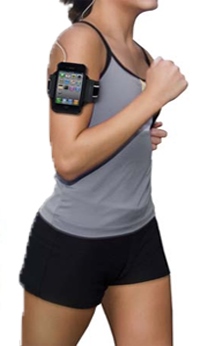 This looks shitty and is not quite comfortable. The best solution for this scenario is wearing a smartwatch with support for wireless earphones. A watch like this can measure the pulse easily and when GPS is supported, the speed and calorie consumption can be measured. I predict that Apples iWatch will work without a smartphone. It will be optimally designed for sports and the batteries will last for at least week in standby-watch-mode. Maybe, the iWatch will be compatible with the iPhone too so that messages or music can be shown or exchanged. But basically, the iWatch will be an independent product – in contrast to the Galaxy Gear.